In the last post, I mentioned we were having a hard time keeping Cason's left foot in his shoe. As the doctor asked, we "exhausted" (literally!) all of our options to keep the shoe on.

First, we tried tape. Yes, actual [masking] tape. This didn't really seem like a friendly option. Next, we found the option that seemed to work the best…. wrapping his shoe, ankle and leg with a sticky first aid wrap (like Johnson & Johnson's First Aid Secure-Flex Wrap) helps keep his foot in his shoe. One roll lasts about a week for us. The only problem with this is that each wrap we cut from the roll only lasts for a couple of uses, its wasteful and its expensive (about $5/roll at Target. Target brand also works great, is just a bit cheaper than the name brand and comes in a variety of fun colors).

We eventually gave up on it all, keeping our fingers crossed he would not move around so much that it would make him come out of his shoe…it has been a hit or miss each day.

(Another idea we thought about was getting regular fabric first aid wrap or some other type of fabric and sewing on velcro to help secure his shoe in place but never got around to trying that option out.)

A couple of weeks ago, I finally had the nerve to make a second request for a new style of braces for Cason .  (The Mitchel AFO bar and shoes…especially since they come in colors now! I contacted them directly and found they would sell them to me without a doctor’s prescription. I never got a clear answer on whether or not an insurance claim could be filed or what the out of pocket cost would be…but that doesn’t matter at this point). I left a message with the doctor stating that I would really love this new set-up and that I would probably order them on my own if they were to deny me once again. Luckily, they were very receptive and the shoes and bar were ordered almost immediately...We just had to schedule an appointment with his orthotist to be sized.


We met with the orthotist last week and are expecting to have his cute little blue shoes and new bar in any day now. He really needs them…he is still in his original shoes and his little feet have grown so much they are nearly exploding out of them (even so, his left foot is still coming out!).
Last week, we also had a check-up with his doctor. Once again, he said his feet were looking great and to keep up the good work. He recognized that there is some difference in the left and right feet but that they are not big enough differences to be concerned over. He joked that the left foot was “supposed to be the good foot” (he did not have a tenotomy performed on it…only on his right) but agreed that maybe it has changed a bit due to it coming out of his shoe so often.  Our next check-up will be in 6 months.


One more thing…Cason has become a mini star on Facebook, Twitter and Pinterest since miraclefeet posted a picture of his custom bar bumper and this blog address on each social site. I’m most excited about all of the “sharing” of the photo and the talks it has initiated to spread the word about the great work the organization is doing…but also really proud the idea was recognized and think its cool that this blog may reach more families in need of a little guidance. 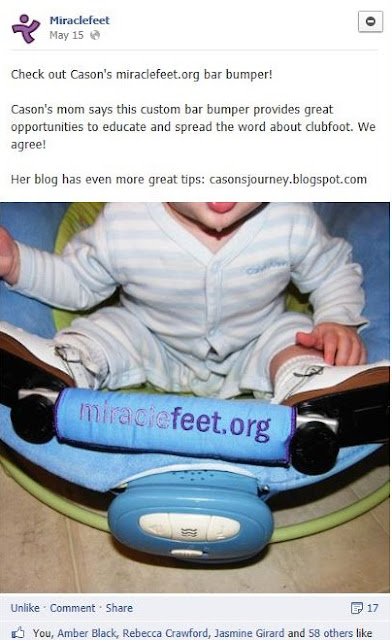 Just a reminder that I did not create the bar bumper nor does miraclefeet offer them. You can order your own custom bar bumper by clicking HERE.